The Harris Auto Group is currently comprised of six dealerships on Vancouver Island.  The auto group has been gaining notoriety within the automotive community of Western Canada due to their innovative and industry leading approach.  The auto group prides itself in protecting the small-town community way of doing business, and high customer retention levels prove its working!  The groups belief is by making employees their number one priority, they will better serve their clients to ensure an amazing dealership experience.  The group has found large success in recent years with on-boarding and implementing innovative ways of training, leading, and growing their employee's careers.  Within the dealerships, the late implementation of innovative digital platforms and processes has reinvented the sales and servicing experience for clients.

We encourage you to visit our dealerships online or in person to experience the 'Harris Auto group' difference. 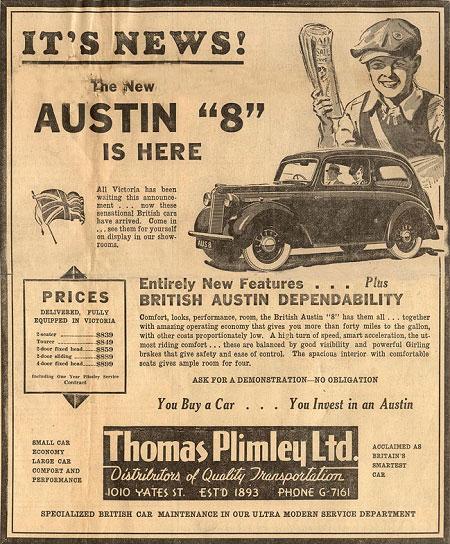 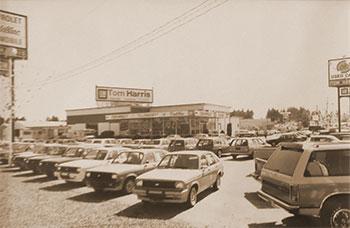 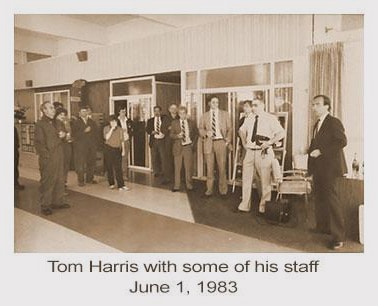 In 1965, the partnership dissolved, so Jack, the more involved partner, became the sole owner/operator of the Rambler dealership, and the store became Harris Rambler. In 1967, a new facility was built in what was then Nanaimo's "North End;" construction of the new building began on an old chicken farm at the corner of Bowen Road and the Old Island Highway. The facility was earmarked to become a full-line Rambler Jeep Triumph dealership.

Tom entered the family business as a "lot boy;" he would work at the dealership after school, on weekends and during the summer months. Later, at the age of 19, Tom went on the sales floor and had a successful year selling cars for his father.

He then enrolled at the University of Victoria, spent one year there, and promptly dropped out. At the time, Tom felt his time was better spent selling cars rather than pursuing an education to become a shop teacher. So Tom returned to Nanaimo and again sold cars for his father. Back at the dealership, Tom had the opportunity to work for several unique sales managers and in 1971, at the age of 22, Tom was appointed Sales Manager of Jack Harris Chevrolet Oldsmobile Cadillac by his father. It was a difficult transition for Tom to manage men many years his senior and with 15 years plus experience; soon enough, though, the staff welcomed Tom and they enjoyed many years of success together.

In 1982, the dealership fell on hard times due to an economic downturn. Interest rates hit over 20% and people could not afford their car payments. By this time Tom was married to Christine and together they already had four children; Tom was very motivated to make a good living to support his large family. Tom scrambled to raise the money necessary to buy the business from his father before the banks stepped in; unfortunately, his narrow window of opportunity closed about one week too soon. The banks shut down 15 car dealerships across the province that year, including Jack Harris Chevrolet Oldsmobile Cadillac.

Six months later, on June 3rd 1983, Tom, at the age of 33, opened the doors to Tom Harris Chevrolet Oldsmobile Cadillac Ltd.; this was an entirely new company operating at the same location his dad had for the 15 years prior. Tom's confidence in himself, his willingness to risk everything, support from his wife, motivation to support his family, and a partner in Jim Gauthier, a very successful GM dealer from Winnipeg, are all to thank for this re-birth. Ten days after opening the new dealership Tom and Christine had their fifth child.

In 2000, seeing the opportunity in smaller imported vehicles, the group added a start-up Kia franchise; at the time Kia offered two models: Sephia and Sportage. Kia was considered to be a speculative automaker at that time. Many felt this was a poor move but ownership felt that, given time, the Kia dealership would become a mainstream franchise.

In 2007, the opportunity to buy the Christensen Mazda dealership in Nanaimo came about; the Harris Group added Christensen Mazda, which became Harris Mazda thereafter. In addition, the OK Tire business in Parksville was added to the growing family of automotive sales and service businesses in 2008

During 2008 and 2009, Tom's youngest son, Tony, completed the NADA Dealer Candidate Academy and Dealer Executive Education at Babson College. He is now the General Sales Manager of Harris Mazda.

Since then the Harris Auto Group has either rebuilt or significantly refreshed all of their dealerships while working on, and re-investing in, the operating companies.

On May 12, 2009, Tom Harris Chevrolet Cadillac was sold to the Wheaton organization when it became evident there was simply no longer room in the Nanaimo market for two large General Motors dealerships. Less than a week later, General Motors eliminated nearly half of their dealerships in Canada when they fell on hard economic times; almost certainly one of the two franchises would have been cut. Part of this deal was the acquisition of the Buick and GMC franchise rights, from the Wheaton organization, for the Harris Oceanside Chevrolet dealership in Parksville.

Not only was Tom Harris a car dealer, but also in 1986 he entered the cellular phone business. Tom was originally approached by a Cantel representative attempting to sell him some cellular phones for his business in the hope of gaining enough interest so as to support the erection of Nanaimo's first cellular tower.

Tom immediately saw the potential and enquired into the possibility of being a cellular phone dealer; shortly thereafter Tom began selling phones out of the showroom of Tom Harris Chevrolet Oldsmobile Cadillac, enlisting the service department personnel to install the devices into customer's vehicles. Soon the business took off and a larger store was required to service the growing customer base.

It was then that a cellular phone "store" was opened above the showroom at Tom Harris Chevrolet Oldsmobile Cadillac. Many Nanaimoites recall those early days when they purchased their first cellular phones from "the store above the showroom." The store ran this way for four years as a Cantel distributor; in 1990 Tom switched to BC Tel Mobility so as to gain a competitive advantage. Ultimately Cantel became Rogers Communications and BC Tel Mobility became Telus Mobility.